The Decision Support Tool (DST) is a component output from the Adaptation and Resilence of Coastal Energy Supply (ARCoES) project.

It consists of a Mapviewer to illustrate the potential flood risks for populated coastal lowlands arising from future sea-level rise and storms. In addition, it includes Animations and allows download access to the model output Data used to generate the maps. 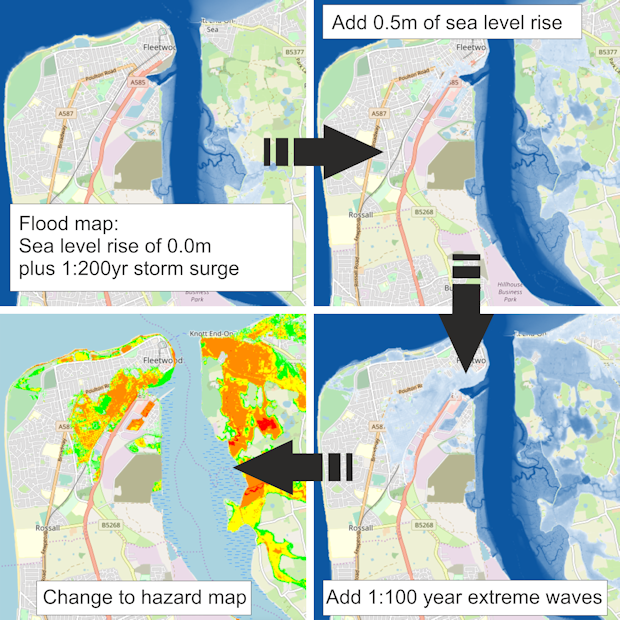 Use the Mapviewer to explore the flood and hazard maps within a GIS Tool (e.g., zoom capabilities and overlays)

Use this to view individual and animated flood and hazard maps

Assessments of flooding due to extreme water levels and/or sea level rises can be viewed using the flood map viewer; flood maps of depth and extent can be viewed as individual images or as animations. In addition to the study sites mentioned above, animations are also available for Dungeness, Berkeley, Oldbury-on-Severn and Wylfa.

The flooded areas shown should not be used for regulatory, permiting, or other legal purposes. The University of Liverpool (as part of the ARCoES project) provide these maps and data "as-is" for a quick reference, decision support tool, but assumes no legal liability or responsibility resulting from the use of this information.

Although the flood-inundation maps represent the boundaries and depths of flood waters, some uncertainty is associated with these maps. The accuracy of the flood water depth and extent portayed on these maps will vary with the accuracy and resolution of the digital elevation models used to simulate the land surface. Additional uncertainties and limitations are described within ARCoES research papers. The flood maps were generated with LISFLOOD-FP inundation model and for a fuller description of how this particular numerical model performs you are advised to view the extensive documentation on the developers web site.